not queen, not duke, not prince

Some follow-up to the previous post, on what I would try to do were I Music Director of an orchestra in Utopia:

--the atmosphere at concert music concerts is daunting to some people, mostly people new to the experience, and I really don't know what the answer is. I like to dress up to go to concerts and, especially, the opera, but I have absolutely no problem with people who don't

--the applause issue is complicated beyond my poor powers to resolve it. Applauding after a solo in jazz is expected, and the rhythm section can vamp until the applause subsides, but there is no such vamping in concert music. And the shushing of clapping after movement is as distracting as the applause itself might be. Plus, there are many pieces with movements that seem to call for applause at their conclusions, so, as I said, I don't know the answer to that one

--other audience sound, such as talking, and other distraction, texting, etc. Concert music typically has a wider range of volume levels than do other kinds of music, and the "average" volume level of concert music in undoubtedly lower than most others, and if the audience is talking one may miss some music; common courtesy towards one's fellow concert-goers would seem to be in order

--theme concerts are, or can be, a very good thing. They can also be achingly precious, so tread lightly

--composer birthday concerts are too easy and too common, unless it's mine, and you take me out to dinner afterwards
Posted by Unknown at 9:16 PM 3 comments:

Email ThisBlogThis!Share to TwitterShare to FacebookShare to Pinterest
Labels: Future of Our Music

if i were king of the forest!

Keith Chaffee, proprietor of the fine LA culture (non-pop and pop) blog In Which Our Hero, has asked, in another forum, what you would do if you were Music Director of the Utopia Symphony. Here's my answer:


--shorter concerts and more concerts (the concert music world operates economies of scarcity when they should operate economies of abundance)
--no big name soloists unless they play unusual (and by that I almost always mean "new") repertoire
--frequent premieres; even more frequent second performances
--local composers, especially if they are unaffiliated
--talk about the music from the stage, with examples
--as a general rule, talk about unusual pieces as if they are familiar (I can almost guarantee that they all have effects that everyone has heard before) and the familiar repertoire as if it were fucked up (because it is)
--I would have the occasional concert or semi-staged version of certain operas; it can make you hear them differently, which is always good (NOTE: Keith had said he would not have these, as the are being produced by the Utopia Opera Company)
--give the strings a rest every now and then; the wind/percussion repertoire is rich and expanding
--I'm not sure what you (NOTE: a different poster had called for such explorations) mean by exploring the boundaries between concert and folk music, so I won't comment
--no film music unless the film is being projected behind the orchestra
--no fucking pops; I mean it

Email ThisBlogThis!Share to TwitterShare to FacebookShare to Pinterest
Labels: Future of Our Music, Links

Every day, Composers Circle showcases a different composer. Today (30 Sep 2013), I am the showcased composer. I appreciate the opportunity provided by this site.

But the real reason I'm drawing this attention to the site is to let you know that you can hear a piece by a different composer every day. What a great way to cover part of the waterfront of today's composers. In addition to the composer of the day, all of the pages are archived.
Posted by Unknown at 6:27 PM 2 comments: 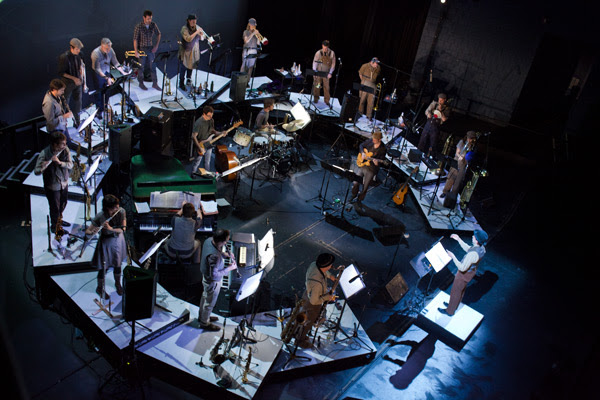 Tomorrow evening, at 7:30 at the Recital Hall of the School of Music of the University of South Carolina (Columbia), my nephew, Gordon Hicken, will be giving the premiere performance of When Your Time is Orange, which I wrote for this occasion. The recital also includes music by JS Bach, Becker, Carter, Masson, Stevens, and Thomas.

If you're in the neighborhood, please drop in.
Posted by Unknown at 8:52 PM No comments:

Email ThisBlogThis!Share to TwitterShare to FacebookShare to Pinterest
Labels: Performance

Phil Freeman has posted the recording of the first performance of my Percussion Concerto at Burning Ambulance. Thanks, also and again to Omar Carmenates (pictures), Leslie Hicken, and the Furman University Wind Ensemble for their fine performance.
Posted by Unknown at 10:38 AM No comments:

Some thoughts on the Florida State Opera production of Carlisle Floyd's Cold Sassy Tree (2000) I attended this weekend:

Posted by Unknown at 8:13 PM No comments:

his life on the plains

My review of Lee Hyla's new disc of music for small ensemble, My Life on the Plains, is up at Burning Ambulance.

An interview I did with Mr. Hyla a few years ago can be found here.

More later.
Posted by Unknown at 6:51 AM No comments:

Phil Freeman has graciously posted an article, "Facing a Blank", that originally appeared in Burning Ambulance #3. The article chronicles the composition of my Percussion Concerto, which premiered last week. I'll be revisiting this article in light of the changes made in the piece in the run-up to the performance, and I imagine that I'll be giving myself a thorough fisking in the days ahead.

Thanks again to Phil Freeman for his attention and support. Please give the entire site a good look.
Posted by Unknown at 9:18 PM 1 comment:

Some thoughts on the premiere:

Posted by Unknown at 7:57 PM No comments:


It's funny how things work out sometimes. (Original observation, I know.)

After arriving in Greenville, I was discussing the progress of rehearsals with my brother Les, who is conducting the premiere of the Percussion Concerto on Friday evening. He said that they had to cut the second movement, "Time's Arrow" for several logistical reasons. This development made me realize something I think I had known but had not articulated, even to myself: that "Time's Arrow", which was originally the last section of the finale ("Grids and Motors") needed to be excised from the Concerto altogether and given a different place, which place I'll be working on later.

So the Concerto is back to a two-movement work, which was the original conception. I'm looking forward to hearing it for the first time this afternoon.
Posted by Unknown at 11:16 AM No comments:


Phil Freeman has posted (over at Burning Ambulance) a recording of the premiere performance of Intertwining Geometries (alto flute and bass clarinet, 2012), played last summer in London by Carla Rees (a fl) and Sarah Watts (b cl). My thanks to Phil for posting it and renewed thanks to Carla and Sarah for their committed and expressive performance of the piece.
Posted by Unknown at 4:11 PM No comments:

I'm often struck, when working on a big piece (especially), how the piece changes during the composition process, and just as often, how the original conception remains in the work's DNA. The Percussion Concerto is about time, or rather about some of the various ways time (and its eternal companion, space) has been viewed from Einstein ("Time exists to keep everything from happening at once.") on: fields, waves, arrows  grids, and motors.

When I say a piece is "about" something, the scare quotes are honest. It's hard to say sometimes whether the metaphors or the music come first, or whether they generate each other.
Posted by Unknown at 9:45 PM 2 comments:

My Percussion Concerto is being premiered next Friday, 22 February by Omar Carmenates, with the Furman University Wind Ensemble, conducted by my brother, Leslie Hicken. The program also includes music by Michael Gandalfi, Roger Nixon, and H. Owen Reed.

I'll be blogging about this between now and then, including posts from Greenville next week. If there are any readers in the area I would love to see you there.
Posted by Unknown at 8:05 PM No comments: